The bridge
into the future

The Klinikum am Gesundbrunnen in Heilbronn is the largest facility within the SLK clinics. In order to adapt to the structural changes in the healthcare system in a future-oriented manner, a number of new buildings were decided upon and realized. One of them is the auditorium in the new building of the clinic.

Prof. Dr. Joachim Cyran, Silke Lohmiller and Thomas Jendges ceremoniously took over the inauguration of the lecture hall, which owes its name to Franziska Schwarz. The wife of the entrepreneur made the construction possible with a generous donation from her private fortune. For those involved, it is already clear that the lecture hall is an expression of the reorientation of the clinics - both in terms of versatile and lively use and in terms of modern media technology equipment. Lectures, symposia and advanced training courses will be held here, as well as public events such as "Health in Conversation" or "Culture in the Clinic".

SLK Managing Director Dr. Thomas Jendges sees the new lecture hall as a bridge to the future, also with regard to the media technology equipment, in order to train qualified personnel there in the long term.

Kindermann Systems from Eibelstadt was responsible for the planning of the media technology equipment for the project. In cooperation with dealers and installers, the project was realized in a coordinating manner under the leadership of Curd Merkens. For example, the regular supplier of the SLK clinics, Lombacher Bürotechnik, approached Kindermann and asked for support in the "auditorium" project. Another example is the cooperation with Hi-Art from Metzingen. The company had been commissioned to install and program Kindermann Systems' media technology.

The central eye-catcher of the Franziska Schwarz lecture hall is the eight-meter-wide and three-meter-high projection screen, which is illuminated by two 12,000-lumen laser projectors from Epson. In addition to the support of lifting platforms, the 350-kg screen required ten energetic men to be assembled. "The challenge was that the projection screen had to be fixed at a distance of 1.4 meters from the sloping wall. The wall mounts therefore also had to be calculated in terms of construction," says Curd Merkens. In order to realize a precise projection, the Epson projectors were aligned to the screen using a laser leveling device. The projectors were also permanently installed in heavy-duty mounts from Chief. The fixed installation is unproblematic because the laser projectors are particularly easy to maintain and reliable, with a light source life of 20,000 hours. The screen is controlled via an EIB/KNX system.

Another challenge was the installation of an inductive hearing loop. Due to the pressure of deadlines, the parquet flooring was already being laid in the rear part of the lecture hall at the same time as the hearing loop was being installed in the front, in order to enable people with impaired hearing to also participate in events. The hearing loop was deliberately moved to the front, as it is customary for the hard of hearing to sit in front so that they can also read lips. Laauser und Vohl, the company commissioned by Kindermann, was responsible for the flawless planning and calibration of the hearing loop.

The podium area of the lecture hall was designed in such a way that the room can be flexibly adapted to the versatile use. For this reason, a permanently installed lectern was dispensed with. A mobile partition helps to separate the tiered seating of the bleachers from the ground-level podium area so that it can be used as a "conference room" with different types of seating. Connections for the media equipment are located in floor tanks and as wall connection modules in the wall paneling. The modules and a large part of the HDBaseT transformers are from Kindermann.

A Crestron 10-inch touch display with intuitive user interface is used to control the media. "A single push of a button is all it takes to have the technology ready for operation," explains Curd Merkens. The control system is also used to control the blinds, lighting and as well as ventilation windows. Furthermore, external devices such as video conferencing systems can be easily integrated. In the future, for example, live transmissions from the operating room will also be possible.

In terms of audio technology, the lecture hall is equipped with loudspeakers from GAE and amplifiers from LAB Gruppen as well as digital microphones from the ULX-D series from Shure. Further external audio systems can be integrated without any problems. The audio system was calibrated by Eventtechnik Metzingen.

Everyone involved is happy right from the start. Still on the opening day, mathematics professor Gunter Dueck gave an entertaining lecture on the digital future.

"We are very satisfied with the installation of the media technology and the associated service. Especially the user-friendly design of the user interface makes the operation of the entire technology very easy."

Audio-wise, the auditorium is equipped with GAE loudspeakers and LAB Gruppen amplifiers, as well as Shure ULX-D series digital microphones. 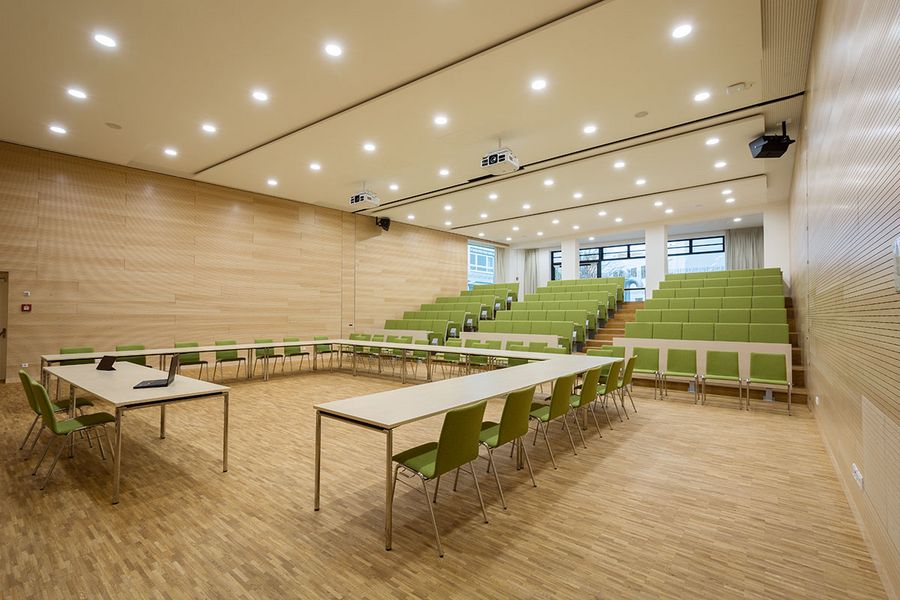 ... to a conference room

Further external audio systems can be integrated without any problems. The audio system was calibrated by the company Eventtechnik Metzingen. 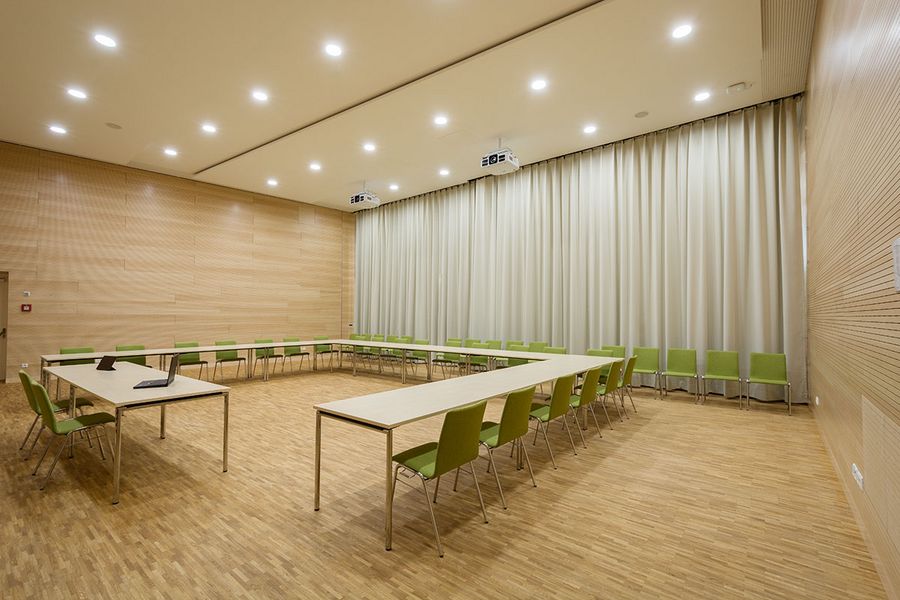